Tulika's Panchatantra
I usually have reservations about subjecting an impressionable tender mind of four or five years, to the stereotypes and violence one encounters in some older tales- be they from Hindu mythology or from the Jataka or the Panchatantra series.This works fairly well but is different from the experience of reading a picture book. 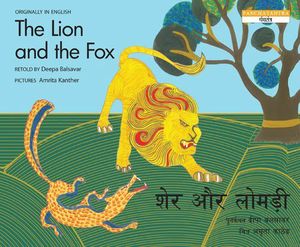 Enter Tulika. Here is an engaging collection of six abridged Panchatantra tales- perfect for the young reader at home. Low on word count , rich in pictures and devoid of gore and a preachy tone. They are available in bi lingual editions including Hindi, Tamil, Kannada, Marathi and so on . 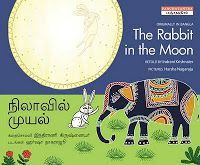 Remember Brahma’s Butterfly and Vyasa’s Mahabharat that Tulika did a while ago. Well this series is not in that genre, as they have an original tale to follow, albeit with some changes.

The choice of stories range from the fun to the profound. The macabre endings in some of the original versions as I know them, have been done away with. Eg. The tortoise is only hurt not dead. 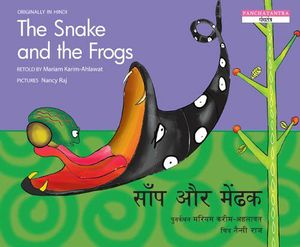 The original language the tale has been retold in has been mentioned on the front cover. The Q&A below explains what that implies.

Each of the six books in the series is written and illustrated by a different duo of author and illustrator. The illustrations in each tale are inspired by a particular folk art/ craft. While Gond, Pithora, Madhubani, Patachitra are the usual folk styles one sees explored, the Kalamkari and the Chennapatna toys' styles were new and interesting additions.

Warli, the latest Indian folk art that is gaining mainstream popularity (be it Coke TV ads or subways in Bangalore) is missing in action. Possibly because it has been explored by some of the other Indian publishers we love here (Pratham) and also by Tulika in Dancing on walls.

Despite the varied styles, overall the set of books look like they belong together. eg. Tree stems in the relevant art style adorn the back page of every tale .

And our favourites among them are The Talkative Tortoise for obvious reasons, followed closely by The Musical Donkey and Four Friends.

Here are some answers to my queries from Radhika Menon and Deeya Nayar.

We are constantly thinking of ways to make bilingual texts attractive to children. Giving them single line ‘simple’ texts is to kill any interest in learning a language. They will be less of a translation nightmare for us but doesn’t excite the imagination in the least! So we come up with attractive themes like cricket, city animals, visually exciting books like Grandma’s Eyes, Night, Upside Down, whacky stories like Jalebi Curls, Norbu’s New Shoes and so on.We have a lot of books with just one or two lines and even just words on a page. While these work very well bilingually we also needed books with a little more text. That is when we thought of using very familiar stories. The familiarity of the stories would make the reading in a new language easier and less intimidating. Panchatantra was a natural choice and lent themselves to creative take offs so well.

How was the art style married to the story and the illustrator choice?

There was no real marriage. We chose illustrators and asked them to choose the style they wanted to work with. The style is also adapted - flourescent colours are not used in Kalamkari usually but you will find them in the book based on that style. We are bringing styles of folk art and retelling to children in our own way.

All these stories have been retold by authors. We left it to the authors to choose the story and retell it in their way. If they had qualms about the originals, then they worked it out in their retelling. ‘Originally in X language’ means that the story was originally retold by the author in that language. We wanted to draw attention that we do original or originally rewritten stories in various languages and translate them into others.

We do want to continue with the series. It may be more Panchatantra stories or other familiar, popular stories like Tenali Rama, Akbar-Birbal, Jataka and so on. All of them open up exciting retelling and visual possibilities. And in two languages!

Thanks Radhika and Deeya.